A Newcomer’s Guide to the City of Roses 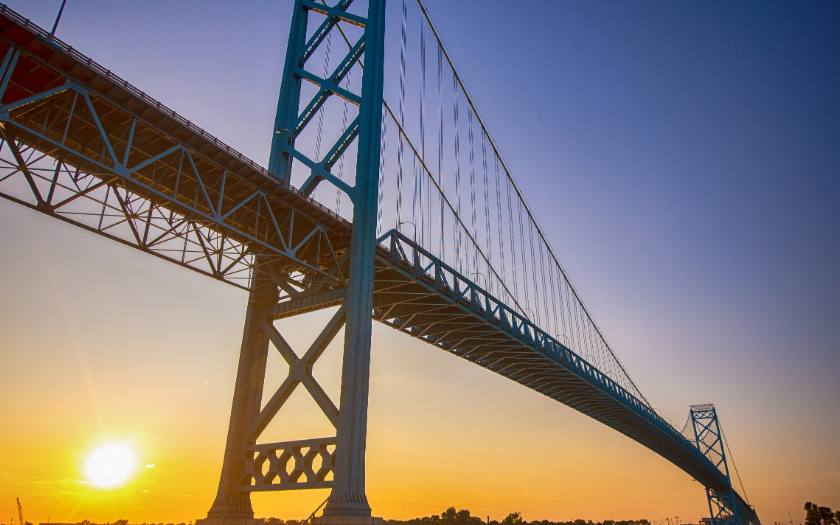 Windsor, Ontario, is the southernmost city in Canada, located just a short distance from Detroit, Michigan.

Nestled on the side of the Detroit River, it is known for its scenic waterfront park (more than 5 kilometres in length) and the Ambassador suspension bridge that connects it to its American neighbour. It is home to a robust manufacturing history, and is often referred to as “the automotive capital of Canada.”
Home to a large and thriving immigrant community, this is a vibrant and diverse city in which to live. Whether you are already living here or planning a move, read ahead to learn more about this beautiful Canadian city.
A brief history of Windsor
Located on the south bank of the Detroit River opposite Detroit, Windsor was originally settled by French farmers back in 1701. This was just after the establishment of a fort at Detroit; Windsor was originally called ‘The Ferry” and then Richmond, before the current name was made official in 1836, after Windsor in England.
Due to Windsor’s ideal location on the banks of the Detroit River, a navigable river just opposite this important American port, it soon became known as an important railway terminal and a vital Great Lakes port. This attracted many important industries, most notably in the automotive field, and including numerous large US branch industrial plants. Windsor grew throughout the 19th century and annexed the nearby cities of East Windsor, Walkerville, and Sandwich in 1935, as well as Riverside in 1966.
Social demographics
According to the 2016 Canadian Census, Windsor (and its suburbs) is home to 325,005 people. You will feel right at home in Windsor, as 27.8% of the population are foreign born and 3.1% of the total population has arrived since 2011. While the most common places of birth for Canadian immigrants are the Philippines, India, and China, things are different in Windsor. Here, the top places of birth are Iraq and Syria. This demonstrates Canada’s on-going commitment to help resettle refugees from wartorn countries around the world.
Windsor Weather
Windsor’s weather is a study in extremes! It is one of the warmest cities in Canada in the summer but can also get very cold in the winter months. You will definitely experience four distinct seasons here. If you are coming to Canada from a warm climate, you are guaranteed to marvel at Windsor’s many annual snowstorms! The first might be exciting, but after your first few dumps of snow you will start to feel like a local, pining for the warm summer months a few weeks into November…
Summer is known for being hot and sunny, and thunder and lightning storms are common in July and August. The temperatures remain quite warm throughout the fall, but then a long and cold winter takes hold.
Windsor Public Transit
Windsor is a very walkable city, but most residents get around with cars. That said, Transit Windsor operates an extensive bus service that makes every part of the city accessible (all the way to neighbouring La Salle). They even operate a cross border service that can shuttle you to downtown Detroit and events held at their major stadiums and arenas. A single ride is $3 ($5 to Detroit on the tunnel service), and monthly passes start at $95.70 for an adult.
The Top 5 Things to do in Windsor
Immigrant Services in Windsor
Windsor is home to a number of useful, free, and welcoming services for immigrants to Canada.
The Windsor Public Library
The Windsor Public Library should be one of your first stops when you settle in Canada. It lends out books and DVDs, but it also gives you free access to computers and the internet. The WPL offers many services for newcomers to Canada, including family story time, adult literacy classes, seniors’ groups, and even one on one sessions designed to teach you how to use the library itself.
Central Branch:
850 Ouellette Avenue
N9A 4M9
Service Canada Office Windsor
Services Canada is one of the most important offices for any newcomer to Canada. A vital part of a federal institution called Employment and Social Development Canada, Service Canada issues many government services and benefits. You will need to make your way here so that you can obtain your Social Insurance Number (SIN), which you will need before you can work in any capacity.
Location:
400 City Hall Square East #103
Windsor, ON N9A 7K6, Canada
Getting to and from Windsor
Its location on the border of a major American city means that Windsor is a uniquely accessible place within Canada. The lower American aviation taxes mean that flights to and from Detroit are often much cheaper than those into Windsor itself. While you can fly from some Canadian cities directly to Windsor, Toronto (a 4-hour drive away) is home to a much larger and busier airport. Therefore, most Windsor residents fly in and out of Detroit for ease and lower costs.